What Is A Web Server And How Does It Function?

Anyone who uses the internet, whether to access a website, check emails or interact on a social network, is interacting in some way with a web server. Originally called as a server, it is responsible for responding to all requests made to an Internet address.

The web server is the heart of any website hosting company. Without it, the internet as we know would probably not exist. In this article, we will find out what a web server is and what it is for.

If you want to know more about it, stay with us!

Differentiating a web server… from a server!

In a simplified way, we can say that a web server is a computer that hosts one or more sites/applications on the internet. However, the term web server may refer to both the hardware and the software contained in this equipment. It is also common to find the term referring to both cases (hardware and software).

The differentiation between server equipment and a server program will be made based on the context in which the expression is used. Let’s understand how to identify each case.

A website consists of a compilation of digital files that are interpreted by the browser and displayed on the screen of a computer/device. To be accessible by anyone, a site’s files need to be stored somewhere. More precisely, on a computer that is connected to the internet 24 hours a day. This computer is known as Web Server.

A server has internal components similar to those found on a personal computer, such as an HD, RAM, motherboard, etc. However, its architecture is optimized for the task of being a server. Thus, there is specialized equipment in this function, as we will see next.

Physical-type servers are found in two different forms: tower and rack. For years, tower-type servers were the standard. However, with increasing demand and the creation of large data centers, rack-type servers have become much more popular. The reason is the high capacity of expansion that the rack format provides, since it is possible to group and interconnect, in a single rack column, dozens of servers.

Just like on a personal computer, a web server has an operating system and several programs can be installed on it. This includes specific programs to perform certain tasks, such as sending pages from a website over the Internet, sending and receiving emails, storing and delivering files, and more. To these programs, we also assign the web server name, as we will see later.

Can I have a server at home or at my company?

Anyone could, if you wish, host a website at home, making your personal computer a server. However, this practice is not recommended as it involves a lot of care and constant maintenance.

For these reasons, it is more convenient (and safe) to outsource the maintenance of a web server with a company that specializes in the subject. And there are many nowadays. A web server is usually allocated in a data center managed by a hosting company.

When accessing a website, the browser (Chrome, Firefox …) communicates with the server, requesting and receiving the data of the page in question. As mentioned, the physical server has specific programs to respond to the type of request made. In the case of a website, this request is made through a protocol known as HTTP (hypertext transfer protocol). All websites on the internet travel using this protocol (or its secure version known as HTTPS). Thus, there are specific programs to respond to HTTP requests. This type of program is also known as a web server.

For other requests, different types of web server are used, such as for sending and receiving emails. A web server that sends and receives emails can be installed on the same computer (server) used for HTTP requests.

So, when we request a page on the internet, the request will be sent to the server that contains the files of the site in question. When the request arrives at the server, the software contained therein will be responsible for processing the requested information and responding accordingly.

A web server can receive requests and send files to thousands of users simultaneously or in a short time.

There are several types of web server available in the market, including free and paid software. Among the most popular, we can mention Apache, Nginx and Microsoft IIS as the most used today. According to W3 Techs data from July 2017, Apache is the leader, being used in 49% of all sites on the internet. It is followed by Nginx, which is present in 34% of sites, and by IIS, which is present on 11% of sites. Of the three, only the Microsoft product is paid, the others being a free and open source.

The list also included others such as LiteSpeed, Google Servers, Tomcat, and Node.js.

All these types of web servers have differences between them, but it is important to know that they are used for similar purposes, which is to serve content based on HTTP requests.

As for the operating system, although there are several, we usually find two types of OS on web servers: Linux or Windows. Linux servers are present on most web servers in the world. Microsoft servers are only used in scenarios that depend on applications based on Microsoft technologies, such as sites and systems that use the ASP.NET language.

To illustrate, while 66% of Internet sites are on servers with a Unix-derived operating system, only 33% run Windows IIS.

Web servers are usually offered as part of a service package, notably the web hosting service. In the most popular website hosting types (shared, VPS, dedicated, reseller and cloud) the web server is offered as an inherent part of the product. Likewise, the user of this type of service will also often have FTP service, database, programming language, among others, included in the provision of the service.

Likewise, the user of this type of service will also often have FTP service, database, programming language, among others, included in the provision of the service.

To define the type of hosting needed in each case, many factors must be taken into account, such as the purpose, type of site (whether dynamic or static), audience, among others.

If you got here, you already know what a web server is and that this term can refer to both the equipment and the software. In addition, we have seen that servers are critical for the internet to function the way we know it today.

For affordable web hosting services, MilesWeb is the right for you. 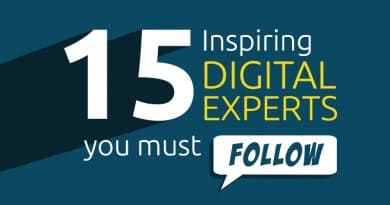 15 Inspiring Digital Experts You Must Follow
Anyone who uses the internet, whether to access a website, check emails or interact on a social network, is interacting in some way with a web server. Originally called as a server, it is responsible for responding to all requests made to an Internet address.......
Keep reading