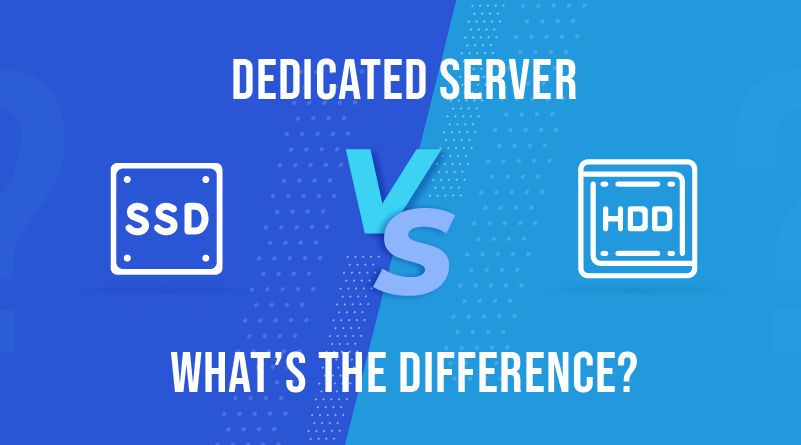 Deciding on the right type of web hosting service or renting server space while setting up your website, is a challenge. A dedicated server is always a prime option over others like shared and virtual servers. Another issue is to choose the right storage option for your server. Storage has always been a challenge since the dawn of computer technology.

The two main types of storage include HDD (hard disk drives) and SSD (solid-state drives). You must understand the basic difference between the two options as they have their pros and cons. This article helps you to decide what type of storage is appropriate for you.

Role Of Storage In Hosting

We belong to a digital world that is driven by information and everyone wants to store that information on a website. To run that website smoothly you need a web server and adequate storage space to store your content. The web server you choose provides you the amount of digital space depending on your requirement.

With time, the volume of your content and your website visitors grows, therefore, it is apparent that you require more storage space to serve those purposes. The kind and cost of storage varies in multiple types of hosting like shared hosting and dedicated hosting so you have to make an informed decision.

What Is HDD hosting?

From the early days of computing, HDDs were the most commonly used storage for the devices. They have been used extensively since the 1950s in personal computers, laptops, and servers to store a large chunk of data at a low cost. The technology behind HDD is simple. It has a metal disk or platter with a thin magnetic coating that stores your data. A reading arm or head inside moves over the platter, writing in binary codes – 0 and 1. To read or access that data, the HDD head goes to the same spot and performs the desired task.

The faster the disk rotates, the faster it can access your data. So, the RPM (Revolutions per minute) is a deciding factor here; for example, if you take two HDDs with 5400 RPM and 7200 RPM respectively, the latter is capable to perform better. In some cases, the speed of HDD depends on the sub-types; like parallel ATA (Advanced Technology Attachment) and serial ATA. In the past, most web hosting providers used hard disk drives or HDDs as principal storage units. The situation started to change around 2009.

Affordable: HDD drives are the standard ones that are more affordable.

Larger storage: The storage base capacity is higher in the case of HDDs; for example, 500 GB is the standard size of HDD, much higher than starting capacity of SSDs.

Less speed: The speed of HDD depends on its RPM, how fast the head of that device rotates. So, this mechanical nature reduces the speed.

Less efficiency: HDDs are noisier, consume more energy, and are prone to damage. Accordingly, they offer less efficiency in the long run.

What Is SSD Hosting?

The SSDs were officially introduced in mainstream computers in 2009. Like HDDs, SSDs also provide storage for data and files for future use. The difference lies in technology. SSDs use a special type of memory, called ‘flash memory. The RAM uses almost the same technology; but the RAM erases the data after the system is shut down, on the contrary, the data is stored in SSD, even after shutting down the system.

The SSDs are called ‘solid state’ as they don’t have any moving parts like HDDs.

In the case of web hosting and servers, SSDs are prominently used for data storage capacity and speed during processing the information. Also, those websites where users demand a lot of information in a short time demand SSD hosting from their hosting providers.

Reliability: SSDs are free of distortions, or breakage because of the absence of magnetic coating or head. So they are more reliable, and efficient.

Data safety: SSDs have very low wear and tear in the long term. This is why the chances of losing your data on SSD servers are very less.

More expensive: SSDs – a comparatively newer technology; therefore, selecting this storage in the server will cost you more.

Storage price: This relates to its previous disadvantage. As SSDs are expensive, their charge per GB is much higher.

Speed and performance: The speed of the server to store, access, and present information to the visitors is the most crucial part. HDD transfers the data after its driving head rotates around the disc. SSDs have no moving parts; as a result, it takes less time to give you the desired result. So, SSD is the obvious winner here.

Security and reliability: HDD with moving parts has a minor chance of data failure leading to data loss in times of higher web traffic and the case of dynamic websites. This failure has a lesser chance in the case of SSD, as it does not use any moving parts. So, SSDs offer better data security in web servers.

Versatility: SSDs are considered more versatile than HDDs for various reasons. SSDs are available with different types of memory cells, and chips. HDDs are dependent on DDR3 memory chips and SSDs depend on storage or cache. But, the storage of HDD can be extended; this is not possible with SSDs. As a whole, SSDs are best for the high-performance server to attain more versatility; however, servers with HDDs are best with a large chunk of data.

Power consumption: Power consumption is an important factor while comparing HDD and SSD in a dedicated server. Compared to traditional HDDs, SSDs consume less power to perform in absence of any moving part. This factor doesn’t matter much in the case of a single system but matters a lot in the case of thousands of servers.

HDD Or SSD Dedicated Server? Which One Should You Opt For?

The basic difference between hard drives and solid-state drives is the technology they use to store and retrieve your files. Solid State Drives are just like the next generation counterpart of Hard Disk Drives. Now, decide which one you should choose for your dedicated server. It entirely depends on your requirement. If you need high speed, more reliability, and better security for your data on the server, go for SSD hosting. It has some other benefits also.

Less loading time for your website with SSD storage will be rewarded with a higher ranking on search engine result pages. SSDs are considered better for multi-tasking; therefore, they will be able to serve large traffic on your site with multiple web requests. On the other hand, if you own a small website or a website with less traffic and your budget is less, choose HDD hosting. Here, the choice fully depends on your needs.

HDDs have been offering budget plans with lots of storage space in dedicated web hosting for years. Now it is time to check for quality over quantity. SSDs can transform your hosting atmosphere for the better. They will cost you more, but with the increasing use of SSDs, they are appearing in budget price. You will be surprised to find that some hosting providers are offering you SSD solutions with just some extra bucks. They are being more popular and accessible day by day and are offered by data centers and web hosting providers.

It is a better option to invest in SSD dedicated servers as they are apt for future growth. When the dedicated servers are run on the hard disk drives, irrespective of how much disk space you buy, HDDs cannot keep up with the high load of activities for a website that attracts a huge number of visitors. On this count, investing in an SSD dedicated server brings major benefits and ensures that your website is functioning well in the peak traffic times as well.